In honour of Jessica, the Jessica Bernardin Award will be presented to the most outstanding performer in one or more advanced level classes at the Syrinx Flute Festival. 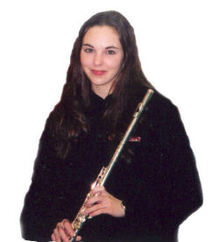 Jessica Bernardin
Jessica Bernardin was born on September 10, 1986. She was delightful and full of life right from the start. Jessica was a passionate and dedicated young lady blessed with a bubbly, outgoing personality, and endless energy as well as talent. Jessica entered the band program in grade six at Windsor School, where she began playing the flute. Before that year was over, Jessica had discovered that her love for playing the flute was also her calling in life.
​
Jessica continued playing the flute at Glenlawn Collegiate, and then pursued her dream of performing in an orchestra by continuing her studies in the Faculty of Music at the University of Manitoba. Jessica was inspired by many wonderful music and academic teachers along the way: Wendy McCallum, Joanne Kosheluk, Bill Kristjanson, Dr. Ann Walker, Ms. Kelly Bekeris, Dr. Fraser Linklater, Laurel Ridd, and Jan Kocman.
Jessica's accomplishments and awards include the following:
Jessica was passionate about all she did in life, especially her flute playing. She would practice for hours on end to master any piece assigned to her: the more difficult the piece, the more Jessica wanted to play it. Jessica was extremely dedicated -- a perfectionist who would go through repertoire at a ravenous pace, and never be totally satisfied with her performance. Although extremely competitive by nature, Jessica always marveled at the talent of her fellow University friends in the School of Music.
Jessica's life ended abruptly at the age of 19 on the morning of November 17, 2005, in a car accident while on her way to the University. Jessica's physical presence may no longer be with us, but the wonderful memories and beautiful music will live on forever in our hearts.
​
Jessica Bernardin Award Winners

The Albert Horch Award will be presented to students for the most outstanding performance in classes 101 - 103. 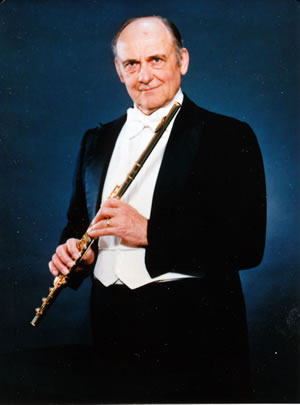 Albert Horch (1917-2011)
Albert Horch was born in Winnipeg, July 31, 1917 to Eduard and Katherine (nee Eszlinger) Horch. He spent his early years in Winnipeg's North End with his parents and siblings. As a teenager he developed an interest in music. In 1932 his brother Ben bought him his first flute, a wooden one, which he learned to play without any formal training. In his youth he participated in school and community orchestras. In 1942 he enlisted in the R.C.A.F. band, and in September of that year he married his fiancé Zelma Pauls. They began their life together in Toronto where Albert was stationed until the end of the war. Albert then served in the R.C.A.F. in Edmonton until 1948. After being discharged he was asked to join the newly formed Winnipeg Symphony Orchestra. He stayed with the orchestra for 30 years then retired in 1978 to pursue full-time teaching. He also conducted many school bands. He taught flute for many years at the International Peace Gardens summer music camp and enjoyed that very much. In his teaching career he had over 1300 individual students, several of whom have gone on to become prominent musicians. Many of his former students continued to keep in touch with him over the years. During his long musical career Albert also played on many CBC radio and television broadcasts. He was also in many of the orchestras for Rainbow Stage, The Royal Winnipeg Ballet, and participated on several commercially issued recordings.
Albert Horch Award Winners
2019 Awards